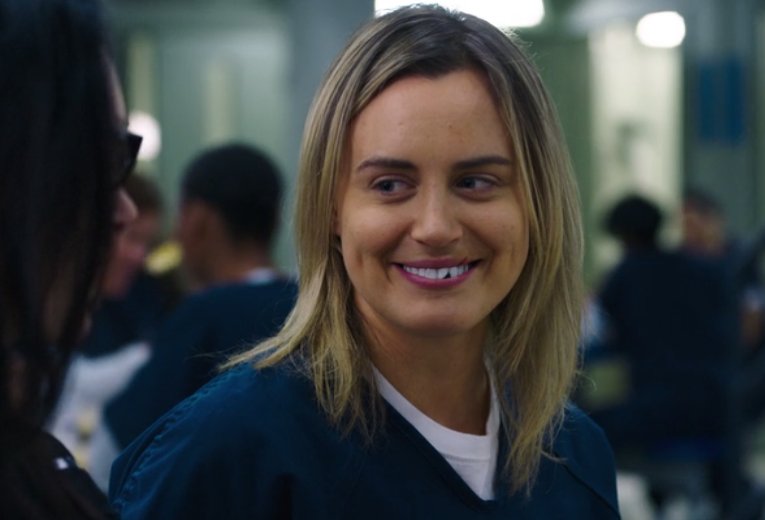 Working inside out, I think it is important to evaluate the episode in the middle of the season when thinking about writing because the first episode doesn’t give an accurate depiction of what the season will be like and the last episode usually ends on a tragic note to promote for continuance for another season.

Episode five of season six on the show Orange is the New Black starts pretty f*cked up…We visualize the guards practicing the same behavior that you think about during the 1800’s when auctioneers were selling and biding slaves. Luscheck creates a way to make tracking each inmate easier (similar to the cotton gin????).

Written by Anthony Natoli, a common writer and editor for the show, he uses comedy to lighten the darkness of the show. While the guards try and collect points for their fantasy inmate game, CO Ginger influences Piper to start a fight with another inmate in order to get her tooth back. She makes a joke saying that she resembled a Jack O’Lantern which pushes Piper off the edge.

Throughout the entire episode Natoli writes with the purpose to manipulate all of the main characters in the show. We experience manipulation with Piper and “Badison” when Badison demands a favor for her in exchange for a favor that Piper did not even ask for. Because of emotional distress, Linda tries to manipulate Fig into building a relationship to get back a Joe, and we experience manipulation between inmate and guard relationships. Further in the season Natoli is also responsible in writing episode 11 where Frieda manipulates Suzanne into thinking they are friends so she can watch her back. He also edited the script for episode 6 in which Pennsatucky manipulates Linda into getting her into Florida (the elderly section of max). Seems like Natoli’s common theme is manipulation.

It Takes an Army to Create a World