As I mentioned last week, New Girl often flips the script on traditional gender roles.  Episode 4 of New Girl centers around Nick’s issues with his body image, an idea traditionally associated with girls and their eating disorders.  Hardly ever do we see men in media feeling insecure about how they look or their weight.  In this episode, Nick is “delicate like a flower” and incredibly self-conscious about his body weight and image after Jess points out his cookie “pouch” where he keeps his extra cookies. 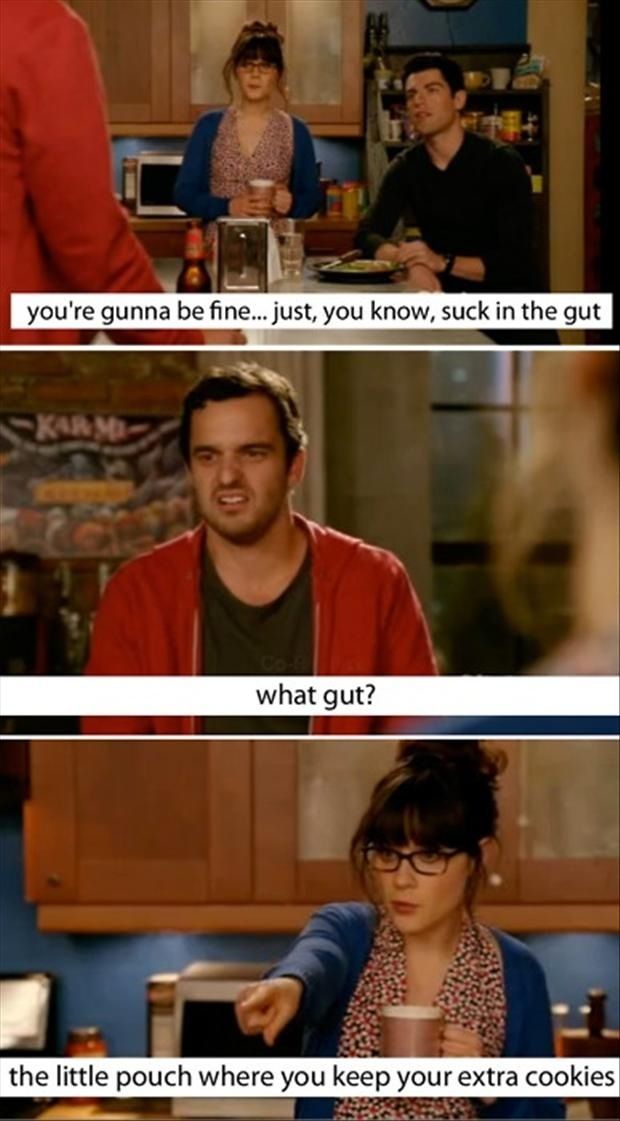 Jess being oblivious, Nick being sensitive

Throughout the episode, Jess is the person in an aggressive/assertive role, trying to get Nick to talk about his feelings, while Nick is generally on the defensive and avoids the conversation topic.  Nick is also passive in that he doesn’t act until he is forced to when someone else acts.  This situation flips the power dynamic in which men are the ones who are aggressively pursuing something while the women are either passive or defensive, just like how Nick only talks to Jess when confronted and finally shows aggression by breaking the feeling stick when Jess gives it to him.  However, there is little to no initiation from Nick to act until Jess corners him to talk about feelings, and he then just tries to escape the situation as fast as possible.

A similar power dynamic is seen with Amanda, his coworker at the bar who Nick has been trying to hook up with.  At one point after another frustrating attempt by Jess to talk about his feelings, Nick shuts her down by saying that what he wants is “meaningless sex”.  When Jess disagrees, Nick insists that he does because he is male (that is, because he has a “bing-bong and chickadees”).  Yet when Nick tries to do so with Amanda, the one who wants to take it slow is the guy with Amanda asking Nick almost derisively about wanting to cuddle.  In traditional portrayals of women in media, they’ve been the people who want to slow down the relationship because it’s going too fast with the guy pressuring them into something they’re not ready for, while the guys have been the ones unsatisfied with mere cuddling that has romantic rather than carnal connotations.  In Nick’s case, he’s the one who is insecure and shy, such as when he’s awkward about taking his shirt off before sex, while Amanda is confident in her body and is going after what she wants.

While presented with the classic New Girl humorous flair, this episode brings up important issues about how body image issues shouldn’t be gendered, and New Girl helps to dispel this stigma and the more general problem of confining gender roles.

Stereotypes and Writing (The Right way and The Huang way)