While New Girl highlights significant matters regarding gender and relationships, the series rarely dwells on a particular topic for too long or with too much depth.  Like Jess, New Girl has been lighthearted and optimistic throughout each episode so far.  While the episodes have touched on issues such as body image and gender roles, there are merely threads of these issues, rather than ropes, maintained through the episodes.  Part of New Girl’s charm is that there is no real overarching plot or end goal that the characters are trying to reach.  As a result, each episode has little continuation from the one before except the same main characters and their daily lives.

Elizabeth Meriwether is the creator and executive producer of the show, while Luvh Rakhe is credited as the writer for the most recent episode I watched.  Meriwether’s most notable works include New Girl and No Strings Attached, a rom-com starring Natalie Portman and Aston Kutcher.  Luvh Rakhe is known for It’s Always Sunny in Philadelphia, New Girl, and A.P. Bio, a new comedy TV series released this year about a philosophy professor teaching AP Biology.

Dialogue in New Girl episodes generally flow pretty well with little pauses or silences except when to prove a point or to generate some awkwardness.  The writers often include flashbacks to fill in the backstories of characters or explore the lives of the guys before Jess came to live with them.  In episode four, there was a flashback to a chubby, young Schmidt in a bunny suit trying to get his mother’s attention, which highlights his desire for attention and warmth, as well as his body image issues that have continued into adulthood.  Episode seven’s flashbacks regarding Nick’s handyman role hints at a socioeconomic difference between Schmidt and Nick through their views on when to spend money and when to put in the work yourself. 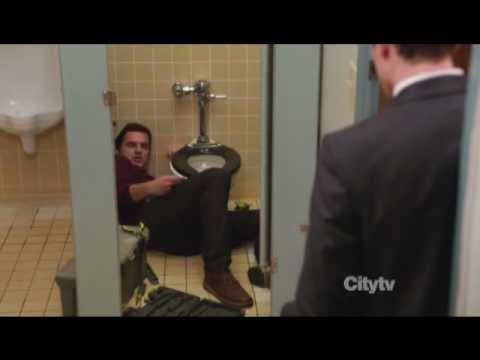 With the series set in modern times and meant to feel relatable to its audience, it makes sense that the writers include snippets of witty quips and pop culture references to appeal to its young adult audience.  With the main characters in about their thirties, though, some of those references admittedly go completely over my head.  Regardless, part of what makes New Girl entertaining and relatable across generations are the situations that the main characters find themselves in and how they interact to solve those problems.  For example, Schmidt and Nick provide models for problems of class and financial discord in relationships, while Schmidt’s characterization magnifies issues of self-confidence and gender roles.

Unlike shows with more drama, such as Jane the Virgin, New Girl draws in its audience with quirky Jess and its more or less realistic experiences and struggles of four(ish) young adults trying to figure their lives out.