What’s That I Spy? Character Growth

In this final blog post, I’d like to cover how New Girl flips the script on tropes regarding masculinity and femininity.  While Jess at first appears to be the epitome of the manic pixie dream girl trope, she is much more than a tool to get broody males to have more fun in their lives.  While the guys seem macho and aggressive at the beginning of the season, they have their own fears and insecurities that are not often portrayed on television.  Schmidt’s characterization in particular undergoes changes as viewers learn more about him and his flaws, from his douchebag jar to his body image issues. 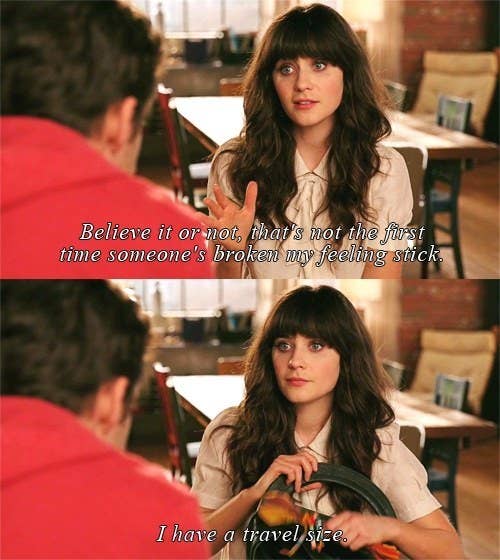 Jess at her core: prepared to help

Admittedly Jess is quirky and childish, which somewhat fulfills the manic pixie dream girl trope, yet she is much more than that as a main character.  She is often the cause for more excitement and drama in the shared apartment, but she doesn’t solely exist for that purpose.  Jess has her own professional hopes and dreams as a schoolteacher and romantic goals in her search for a stable relationship so that her life doesn’t only revolve around her roommates.  In addition, Jess has her flaws with her eagerness to be helpful and is often seen as a pushover but grows as a person through becoming more tactful and willing to stand up for herself as the season goes on.  She goes from reluctant to confront Spencer, her ex-boyfriend, to standing up to Julia, Nick’s girlfriend, who puts Jess down for her bubbly demeanor and bright outfits.

When we first met Schmidt, he was arrogant and aggressively flirty to the point where he had his own douchebag jar for his inappropriate comments.  However, he soon reveals a softer side when he gives up his costume party to help a stood-up Jess.  Schmidt also ends up being the one who cooks and cleans, as revealed in episode 16, which are traditionally feminine roles that contradict his façade of traditional masculinity.  While Schmidt is often seen pursuing women, his actual relationships consists of him being in a more submissive role, as seen with his turbulent relationship with Gretchen and his later relationship with Cece.  In his relationship with Cece, Cece is the one with control, especially over the secrecy of their relationship.  While Schmidt acts affronted for having to be available whenever Cece calls, he bends to her demands and continues to stay in the relationship.  Their relationship dynamic differs from those often portrayed on television that have a power imbalance in which the woman lacks or has less control and influence in the relationship because of a difference in status or role.

Watching New Girl has been a highlight in my week with Jess’s quirks and the shenanigans that the characters get up to.  The show really succeeded in having characters that are genuine and unique in their relationships and flaws while inverting common tropes related to gender representation.

Mainstream sells- Culture does not

Jane Sloan in The Bold Type: What?