Hello! My name is Lukas Hessler, and I am a first year here at Tech studying Industrial Engineering.  I hope to complete my undergraduate degree within 4 and a half years so I can head back to work in Southern California (where I am from) sooner rather than later and start work.

Me on a beach

1102 is my first and last English course I will take at Georgia Tech, and I am really looking forward to it.  In high school, the thing that irritated me the most about my English courses was that they were always the same course work: reading, analyzing and writing essays.  English has always been my least favorite subject because I always hated the tedious cycle I went through year after year. However, I am super excited to learn about the relationship between the entertainment medium of Television and the social wave of Feminism. Not to mention, learning about these topics while completing fun, interactive projects such as the ongoing Twitter posts and Blog posts is something I really look forward to.

In regards to the WOVEN methods of communication that we will also be studying this semester, I believe I communicate most strongly through the Oral method as I feel more confident in sharing my opinion while also being able to express emotions and sentiments toward others. On the contrary, I think I will most struggle with the written method of communication as I have never solid prose in English writing assignments but I hope to improve in my communication via the written mode of communication.

As of recently I have not been watching very much TV at all but I do re-watch episodes of Friends, The Office, Parks and Rec, and Workaholics on streaming services occasionally.  However I am looking forward to watching more TV series and hopefully rekindle the love for the television industry that I used to have when I would watch Spongebob everyday before elementary school.

With that being said, this semester I will be watching and studying the TV Series “Unbreakable Kimmy Schmidt”.  The sole reason I chose to study the intricacies of this series is because my older sibling loves watching the show and talked me into watching it.  I have been told that the show is about a group of girls, one being the main character Kimmy Schmidt, who were kept underground in a nuclear bunker by a priest who convinced them the world had ended and that they couldn’t go outside.  The series begins when all the girls get saved from the bunker by the government after nearly a decade.  The series tracks the main character, Kimmy Schmidt,  getting accustomed to the world that she hasn’t seen since she went into the bunker. It’s seems like a very interesting premise and I’m looking forward to watching and analyzing the series!! 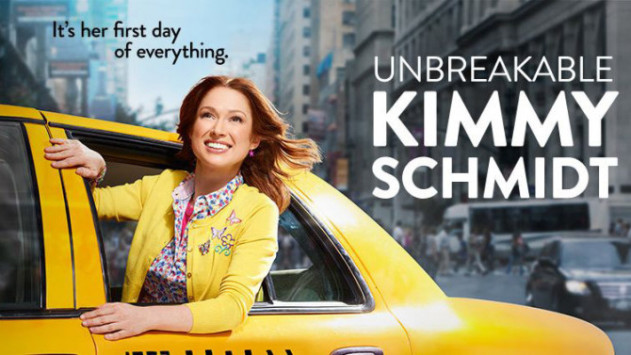 My face when I can watch TV for homework