The Power of Music in Relationships

Throughout Fresh Off the Boat, music serves as an important component in building relationships. The show tries to communicate that music preference plays a central role in friendship formation. One of Eddie’s primary distinctions is his interest in rap. Not only does it provide a conversation starter, but provides a sort of emotional connection through shared interests. Without actually saying anything, it demonstrates that the emotions strongly felt are shared between two individuals. This is extremely important in the context of building a relationship. Eddie utilizes music as a means to build friendships. One of the most significant occasions of this is in episode 11 of season 3, wherein Eddie struggles to connect with his cousin until they realize that they both share a passion for free styling. Not only does this provide a shared activity for them, but it also seems that Eddie has a newfound appreciation for him. After free styling, Eddie’s tone completely changes around him. This demonstrates the power that music has to be used to create a connection.

In episode 13 of season 2, Eddie makes a mix tape for a girl he likes. They initially started talking because of their shared taste in rap, so Eddie thought that creating a mix tape would help strengthen their relationship. Eddie fears talking to her on the phone, so he decides making a mix tape would, “do the talking for [him].” Eddie feels as if music can communicate his emotions. Music serves as insight into Eddie’s thoughts. It is a huge portion of his identity. In fact, in the episode, this girl becomes mad at him and she says, “Nothing you say is gonna…” and Eddie cuts her off with his mix tape. The music calms her down and she begins to understand him and eventually they make up.

Overall, the show demonstrates how powerful music is as a means of connection. It easily communicates one’s emotions to another, regardless of any held beliefs.

Fresh Off the Boat has a fresh visual design. The colors are bright, the cuts are quick, and the color scheme is warm. This show is so wholesome that it even reflects in the visual design. The colors are warm schemed, reflecting the warmth of the show and the inviting characters as the series wants to display their family dynamic. This has the effect of carrying over the program’s lightheartedness. There are no gloomy days, dark scenes, or special effects in the show. It is very clean cut and looks bright and cheery even when nighttime scenes are shown. 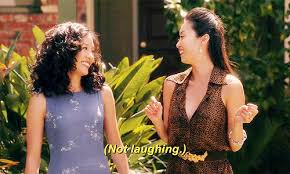 The show has mostly longer scenes, with a plotline falling over an average to long timeframe, but shots are quick and clean. Conversations between characters are shot with quick cuts between each perspective, ping-ponging between lines of dialogue. Every once in a while scenes are shot differently, like the opening of Episode 7, when the Huang’s are in a mock robbery scene. The opening of the showtimes special edits with riffs and music. The narration is paired with shots, especially when narrating the thoughts of multiple characters at a time, which the show does often. These long takes help the development of the show by allowing for longer jokes and humor with better punchlines and more drama between the characters. Scene 7 also shows a fantasy of Eddie Huang wanting to hit on his crush, who he is intimidated by, by showing her his music taste. In this scene, he gets up to walk back to her and enters a fantasy edit with backup dancers and an autotuned bus driver. More intimate scenes, like one on one conversations between the mom and dad, are shot closer up, leading you into the conversation as if you were there. If it weren’t shot this close, it would feel as though you are observing something private, and may lose engagement with viewers.

the way they look at each other <3

I find the intro of the show interesting cinematographically because it uses unique panning styles and zooms not used in the actual showtime. In the title sequence as well as most of Eddie’s scenes, the music is paired with the style of the shot. Zooms have riffs, sexy scenes have jazz, happy scenes have elevator music and Eddie’s got his 2pac. Is this show Straight Outta Compton or Straight Outta Suburbia?

“Home Sweet, Home School”, the second Episode of Fresh off the Boat, really sets up the way the rest of the show will operate based on the style of the writers. A team of four is responsible for writing this episode, including Kourtney Kang (known for her role as a producer of How I Met Your Mother) and Eddie Huang, the focus of the autobiography and the narrator of the show. I think part of what makes this show so interesting is that Eddie narrates his own past life. He knows exactly how he felt in the moment and how he feels now that he’s grown up. As much insight as this offers, it’s also valid to check ourselves with how much we trust him- I mean he is writing out his life for the world. The combination of he and Kourtney Kang in writing this episode makes for an interesting personality in the writing- with her Emmy nominated comedy writing skills and his life experience it really makes the show a worthwhile watch both as a social commentary and as a chill binge watch.

the best of both worlds ;)

This show is absolutely filled with noise. There is literally never silence. Even when the character to character dialogue isn’t going, there’s Biggie, Stephen King movies, NASCAR races, 90s hip-hop, and restaurant chatter in the back. The amount of constant noise makes the show really full and fun to watch. AND DON’T EVEN GET ME STARTED ON EPISODE THREE
My goodness, when Evan did the voice over of the white moms talking at the neighborhood meeting, I laughed harder than I have in a while. Between the hip-hop tracks which emphasize Eddie’s moods, the clapback narrations, and Evan… well, being Evan, this show doesn’t stop with the jokes. The writing of this show is just absolutely on point for the message of it. The constant allusions to quintessential American favorites- Whitney Houston, Biggie Smalls, Karaoke, NASCAR, Blockbuster, block parties, basketball, denim jorts, and Jordan’s- make this show what it is. Hilarious.

Jessica having her Whitney moment #mood

Aight ATL, what’s happenin’? I am David Veres and I came here from the far-reaches of Charlotte suburbs from a town by the name of Weddington in North Carolina to study Chemical and Biomolecular Engineering. I anticipate to graduate with the class of 2022, but if my interests in foreign studies dragged that out by a semester or two, I wouldn’t mind it because I would always be coming back to my long admired city of Atlanta.

I am really looking forward to this English 1102 section of Television and Feminism because I am eager to delve into and understand a new form of media and art. I always found most of my experiences with English courses to be pretty dry because it was always the same recycled format of reading a book and writing a paper since my earliest days in elementary. Actually, I hated English classes for many years. I somehow reluctantly pulled myself through the AIG Reading program for about five years until I had my breakthrough in grades eight through ten. I had began to take rap more seriously in it’s lyrical dimensions and the poetry unit I loathed in previous years was something I yearned for — just not haiku’s and sonnets. It was the dissecting of hip-hop and rap verses that really helped me build up my analytical arsenal. In my last two years, College Board has once again managed to absolutely kill the joy I once had by making me write timed essays about article segments and read books that frankly had more incest than I could have ever asked for in Song of Solomon and Invisible Man. Me trying to sneak in a Kanye reference for the ten millionth time.

Moving in a different direction, even though I said I think I would struggle most with the visual component of the class during my introduction video, I think I will still struggle more with the written component. Watching the novela Jane the Virgin has eased my nerves a bit and even made me excited to binge the whole season! However, even as I sat down to write this blog post, I still had to overcome this insane prewriting-phobia that I have every assignment. Seeing that the content of this course is significantly different and will be my last English class ever, I hope to overcome my fears of writing and even develop a desire to immediately put my thoughts into a body of work rather than procrastinate until the last day. Furthermore, I hope to become proficient in translating my thoughts and feelings into sentences that actually make sense (a longstanding Achilles heel of mine).

Finally, I am the farthest thing from “well-versed” in television. My only experience comes with Donald Glover’s show Atlanta FX which depicts a much more realistic struggle of daily life as an African American in modern America. Also, I have not had entrenched myself in the topic of feminism because I never had any social issues with the movement due to my very progressive and liberal ideology. I am more of a reserved person so I never had any friends that were girls, but over the summer I started my first serious relationship and I would not trade the knowledge I have gained and the way I view love for anything. It has been exceptionally exciting because my girlfriend is from a completely different country so getting to know her culture has been an endless supply for my curiosity. My curiosity is what is also leading me to chose to watch Orange Is the New Black as my show to review for this class. I am always gripped by highly provocative and polarizing figures because I enjoy how deeply they make me think about living a life from a different perspective and I feel like the radically lifestyle inside a women’s prison is exactly the fresh content my analytical mind needs. Me to all my previous English teachers who never wanted to watch the movies for the books but that’s all I am doing this semester.